Some of the finest maple syrup Vermont has to offer comes from our mountainside sugar maple trees.

At Green’s Sugarhouse it is our mission to produce the highest quality maple products at the fairest prices, produced using methods that keep the traditions of our ancestors alive.

Green’s Sugarhouse is nestled in Finel Hollow, Poultney, Vermont, where our ancestors settled in 1774. Over the years, the tradition of maple sugaring has been passed down through our family for six generations.

Richard Green has been around maple sugaring his entire life. Starting out as a young boy, working on his grandfather’s farm in Castleton, Vermont, he soon realized that he wanted to continue this family tradition. His first memory of maple sugaring as a kid, was riding on the back of a sap gathering sled being pulled by a small old bulldozer. He and his brother would drag their feet through the snow as the sled moved slowly along the sugaring roads, watching the sap being collected from buckets and dumped into the gathering tank. Rich loved being on the farm and by age 9, he spent every Easter break from school helping his grandfather make maple syrup. After college, while living in Charlotte, Vermont Rich and his wife Pam decided to build their own small sugarhouse. They tapped about 50 trees on the side of Mount Philo. 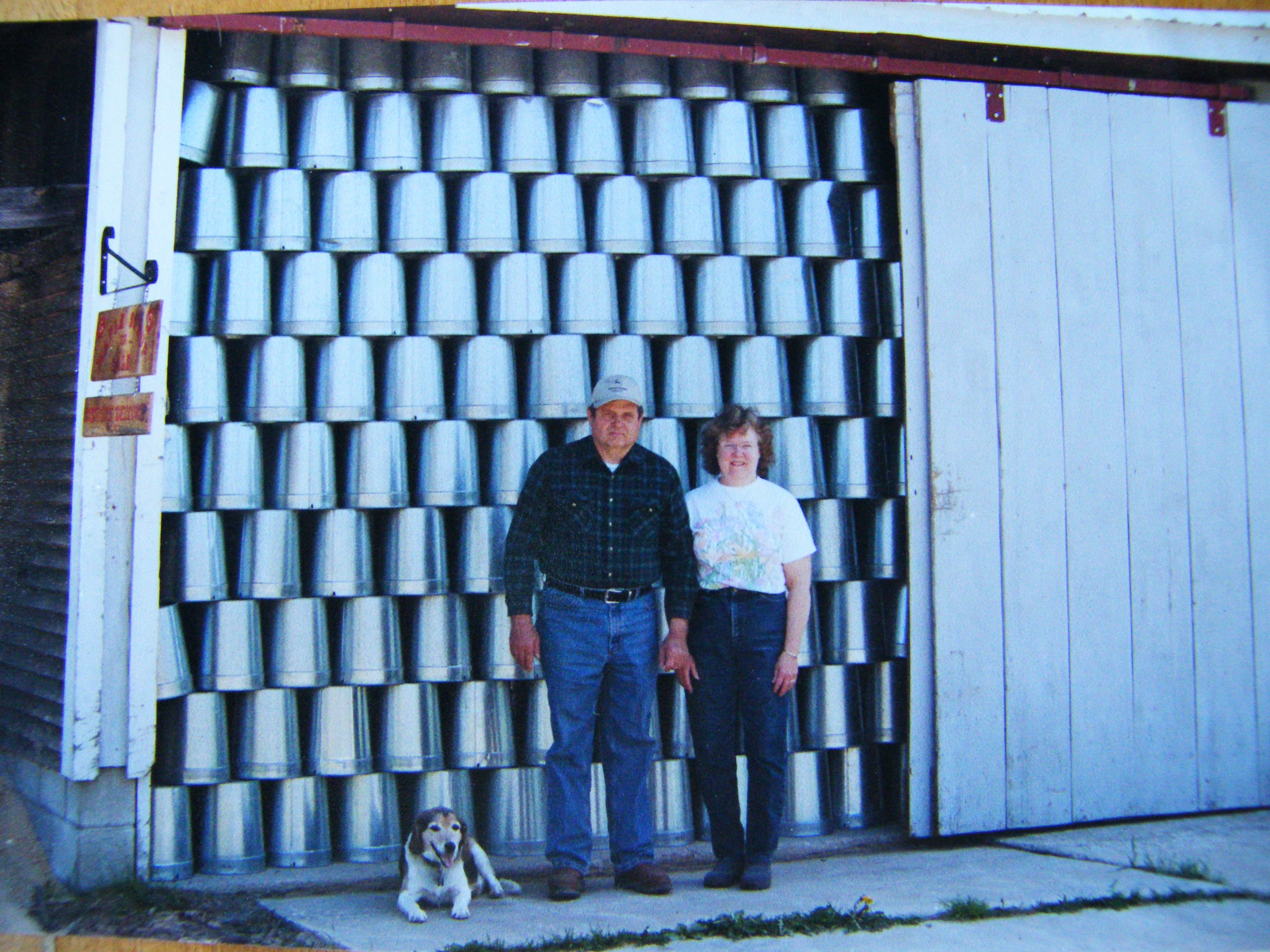 Rich’s mother’s family homestead in Poultney, Vermont. At the “Homestead” they started sugaring in the old family sugarhouse, about a half mile into the woods. The evaporator they used was 3′ by 10′ that Rich purchased from an old hermit in the Adirondack Mountain’s of New York State.

They used buckets to tap around 200 trees at first. Some of those trees Rich’s family had been tapping as far back as 200 years prior!

Over the next few years Rich and Pam added some buckets here and there. Soon after they moved to Poultney, they began selling their syrup at the farmers market in Rutland, Vermont. Around 1985 the town manager of Poultney, Vermont put an article in the paper asking for anyone interested in starting a farmer’s market in Poultney to come to a meeting. 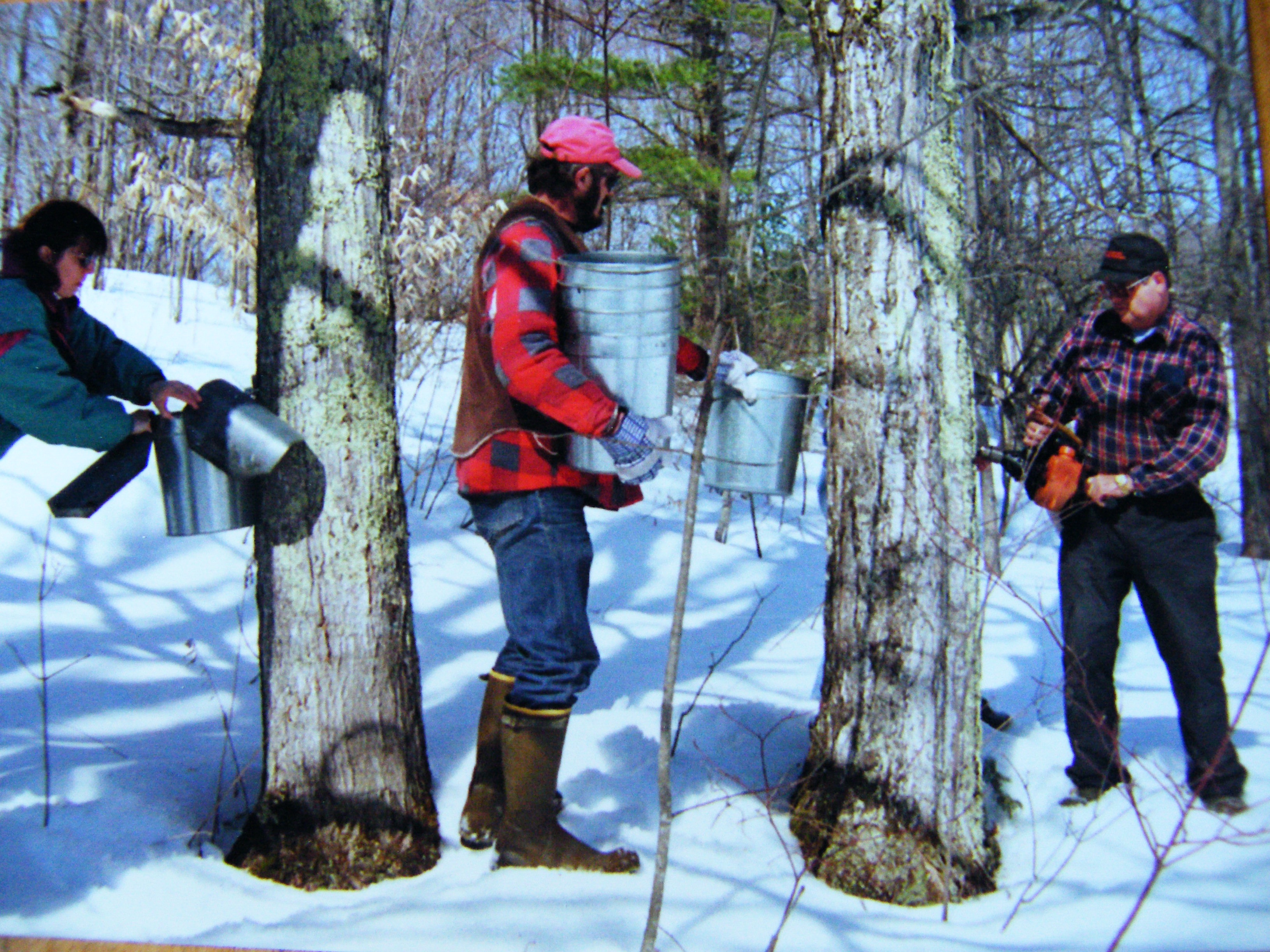 Being one of the only ones with prior experience, Pam became the organizer and manager of the Poultney Farmer’s Market. They also began to do several craft shows throughout the year.

In the fall of 1985, they built their new sugarhouse. All of the timber for the building Rich felled and milled himself. If you ask Rich he says he only bought the concrete, nails and metal roof. The dimensions of the sugarhouse were 20’x36′. Big enough to fit a bigger evaporator.  In the fall of 1996, they graduated from the 3’x10′ to a 5’x14′ wood fired evaporator. Rich claims at first Pam was nervous to use it because it was so big! 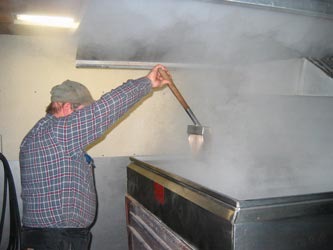 Rich retired from his regular job in 2001 and he and Pam began to work full time working at their maple sugaring business. At this point, they were putting out 2,200 buckets every spring. Even with the help of family and friends, this became a monumental task for essentially just the two of them. They felt to grow the business they needed to make some changes and improvements. So in 2001, Green’s washed and stored all their buckets for the last time and installed 5,000 taps on maple tubing. The same year Rich and Pam changed to a pipeline system, they purchased a reverse osmosis machine. This machine would take a percentage of the water out of the sap before it was boiled, saving on time and wood energy. No more all night boils and sleeping at the sugarhouse. Making more time for tubing maintenance in the sugar woods and less time cutting wood. 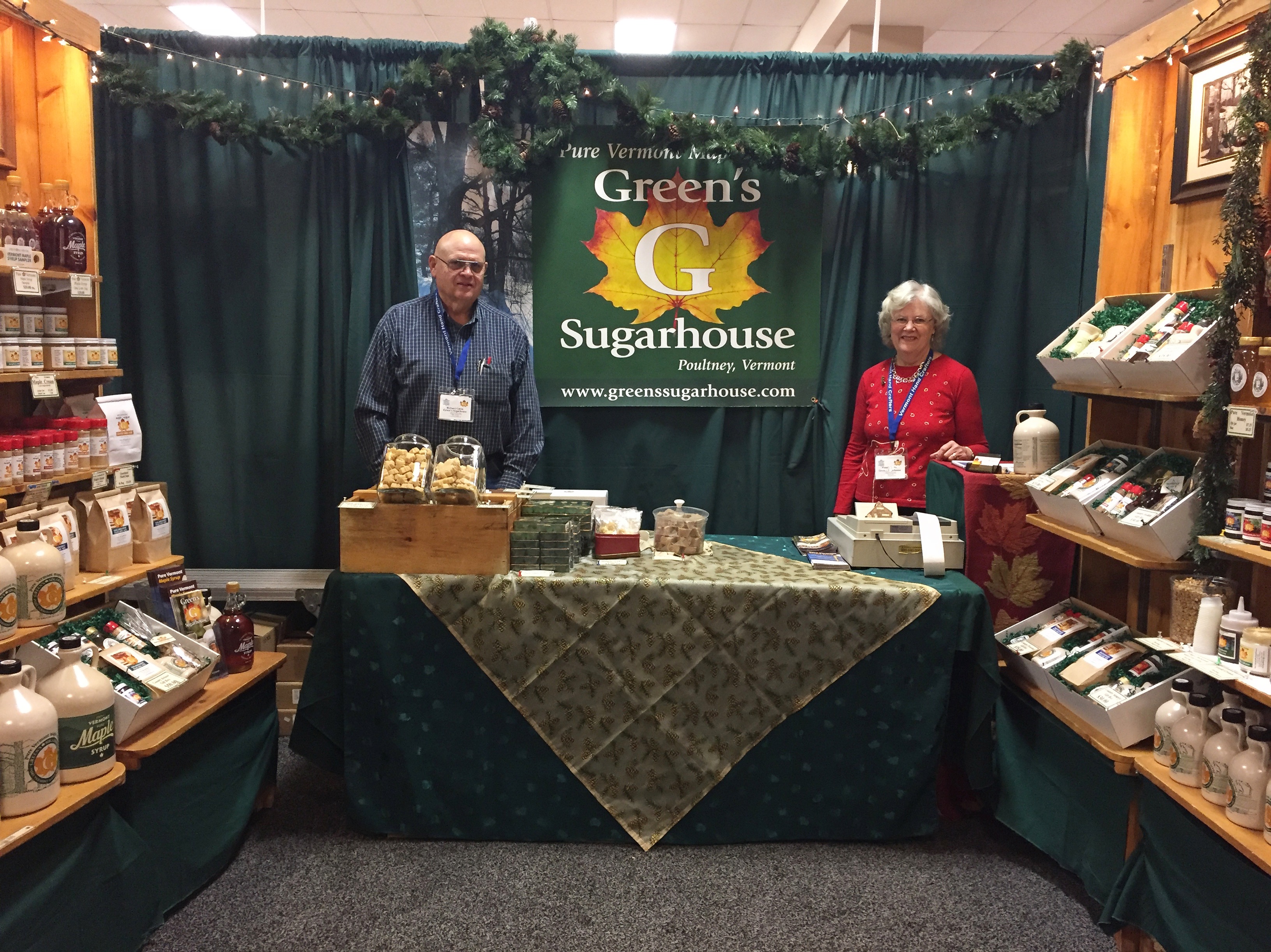 Green’s Sugarhouse currently sells almost our whole crop direct to consumers through craft shows, farmers markets, online or at the sugarhouse store. After the syrup is boiled, properly filtered and graded we put it into our 40 gallon stainless steel barrels. The barrels of syrup are stored in our walk-in cooler. By storing the syrup in our walk-in cooler we are ensuring that the pure maple syrup we put in our retail containers and other products is as fresh as the day it was made! 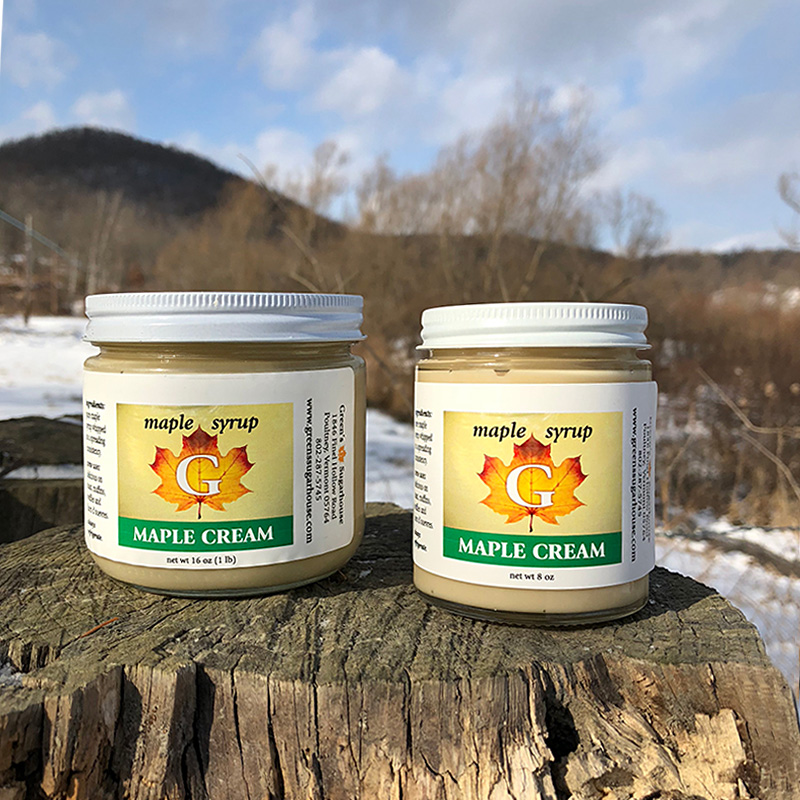 Other products such as our Maple Sugar Spices, Pancake Mixes, Dressing, Jams and more are homemade at our sugarhouse with only top quality ingredients.

Green’s Sugarhouse products are made in small batches throughout the year to ensure our customers receive the freshest product possible! Not one that has been sitting on a retail shelf or in a warehouse for a long period of time.

At Green’s Sugarhouse we love producing maple products, teaching people about maple, and sharing our love of maple and our unique way of life through interactions with our consumers. We love educating them about the healthful benefits of pure maple syrup, how its made and delicious recipes to try it in.

Today, Rich and Pam continue the tradition together with their two beagles, Tapper and Ellie, who are always happy to greet visitors at the sugarhouse! Contact us now for a visit anytime of year! 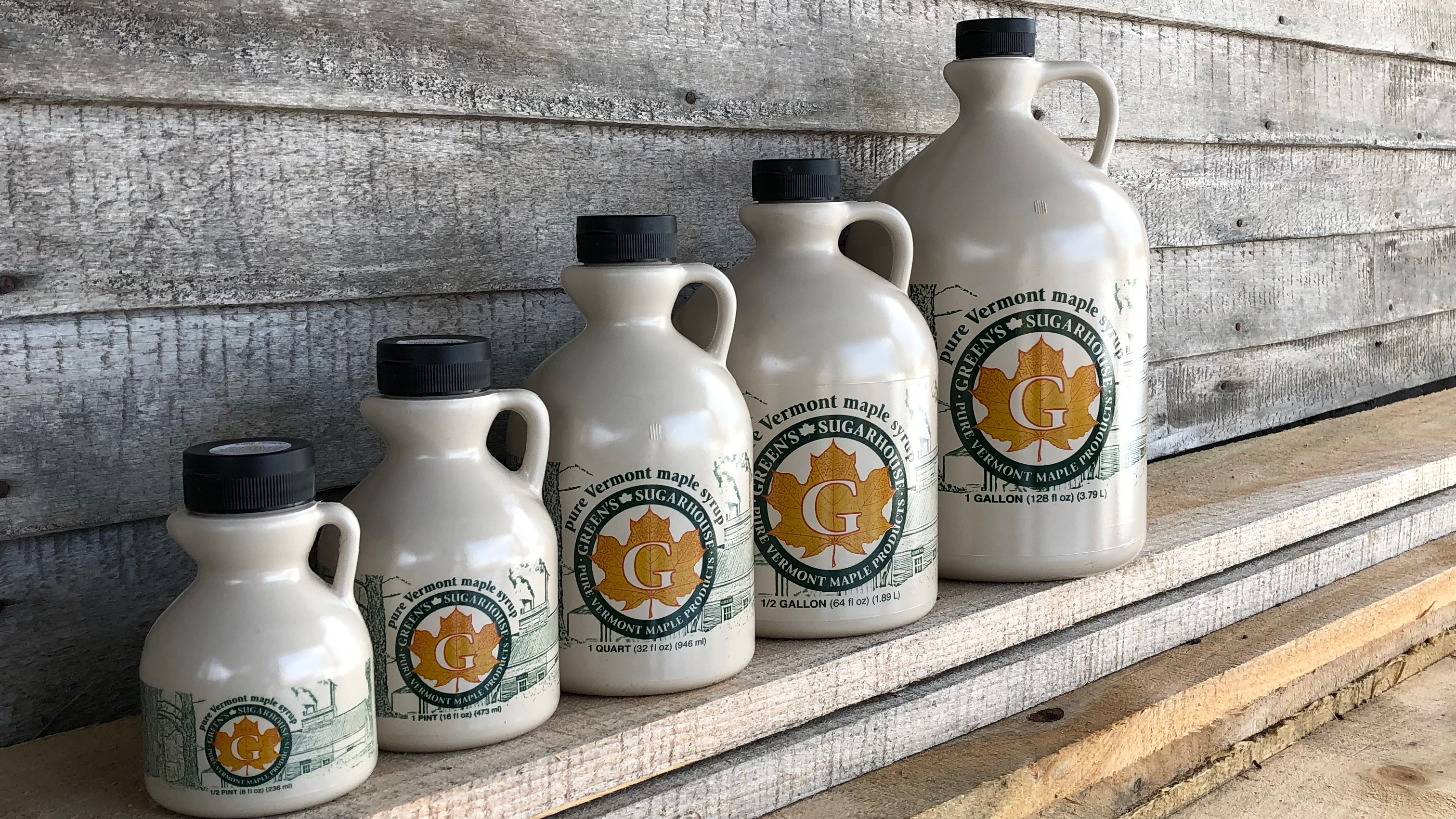 Looking for Even More ?

If you have more questions or want to learn more about sugaring follow us on Facebook at Green’s Vermont Maple Sugarhouse, on Instagram @greenssugarhouse or sign up for our Emailing list. You will also be notified about new products, entered in our free giveaways, learn new recipes to use with pure Vermont Maple and much more.

Thanks for taking the time to read!

Need more MAPLE in your life? SIGN-UP for our newsletter!

More products you will LOVE!